The present study determined the propotion of smoking and related factors over 1.200 Khmer ethnic people from 25-64 years old at 30 communes and wards in Tra Vinh province, with using random sampling method according to population size.
Results showed that the propotion of smoking was 32.0%. Inside, occasional smoking rate was 3.0%, daily smoking was 29.0%, smoking prevalence among men is higher with 68.0%, was 2.7% in women. Age started is 20.6 ± 5.6 smokers. The smoking habit related to the age, occupation, education, alcohol abuse.
The smoking rate of Khmer people at Tra Vinh was high. The smoking rate had been related to other health behaviors such as alcohol abuse and physical activity.

Each year, the global tobacco epidemic kills an estimated 6 million persons in the worldwide, including 600,000 who die from secondhand smoke exposure.
If current trend continues, it is estimated that by 2030, the tobacco use will result in approximately 8 million deaths in the worldwide annually; an estimated 80% of these preventable deaths will occur in low- and middle-income countries [1]. One third to one half of lifetime users die from tobacco products and smokers die an average of 14 years earlier than nonsmokers. Among the estimated one billion smokers in the worldwide, men - women ratio is by four to one. In 14 countries, at least 50% of men smokers, whereas in more than half of these same countries, fewer than 10% of women smokers. If current trend persists, an estimated 500 million persons alive today will die from use of tobacco products. By 2030, tobacco use will result in the deaths of approximately 8 million persons in the worldwide each year [2]. Between 1990 and 2010, the prevalence of tobacco smoking at all ages increased by 1% in men and declined by 2% in women in Iran, but the overall prevalence in the general population was unchanged (12%) [3].

In Vietnam, although the program, policy and public health efforts have been applied to prevent the harms of tobacco products, the smoking rate remains high and the tobacco industry number is still growing. The Global Adult Tobacco Survey (GATS) which conducted in Vietnam in 2010 showed that the smoking rate of Vietnamese male was highest in the world (47.4% of adult men). According to the report of MOH (Ministry of Health) in 2015, the prevalence of smoking in Vietnam was 22.5% of population at the age over 15 years old. Comparison to 2015, the smoking rate was decreased from 23.8% to 22.5%. In which, the smoking rate was reduced from 47.4% to 45.3% in men and from 1.4% to 1.1% in women [4,5]. However, the national reports have not fully aggregated and specified the smoking status in the ethnic minority community who live with different customs, traditional habits and social economic condition. Tra Vinh province has a high density of Khmer minority people who have difficult social economic condition, limited access information and health care service. The risk of smoking and its other related factors could be determined in order to develop the method and policy in protecting and improving public health.

Subjects
Khmer minority subjects aged from 25 to 64 years old, living permanent or temporary in the commune over one years were included in the study.  The pregnant women or subjects with disability with huchbacks, scoliosis, or foot deformity were excluded.

Methods
Study design
It was a cross-sectional study.
Sample size and selection technique

Choosing sample
Thirty communes were chosen by using random cluster sampling based on population size. There were 40 chosen people each cluster as in population statistics list, which divided into 8 groups of age such as 25-34, 35-44, 45-54, 55-64 years old. Chosen 5 people according to the age groups and gender.

Data collection
Interview was conducted by using structured questionnaire, according to the form of the World Health Organization.

Study ethics
Benefits and personal information of the object will be protected in accordance with regulations of the
Ethics Council of the National Institute of Hygiene and Epidemiology and Tra Vinh Department of Health.

The smoking time and frequency
In the daily smoking group, the rate of smoking over 10 years was the highest accounted for 84.2% and the frequency rate of smoking with 10 to 20 cigarettes/ day was 39.4% (Table 2).

Lung cancer risk (Table 6)
According to the standard criteria of American Association for Thoracic Surgery (AATS), the risk of lung cancer in smokers was about 7.5%.

Beside of that, most smokers started to quite smoking early with the average age of starting smoking 20.6 ± 5.6 years old and the rate of smoke exposure time over 10 years was 84.2%. Based on the most
recent data in Vietnam (2010), the prevalence of smoking among adults aged >15 years was 23.8%, with a higher percentage among males (47.4%) than females (1.4%) [7]. Smoker subjects were almost the farmers and the general level of intellectual was limited with the low rate of higher education at secondary and high school. In addition, the difficulties in approaching and changing behavior of the teenagers in this commune. These factors were directly contributed to th reasons of having high percentage of young smokers and the public health problem was affected by the long time of smoking exposure.

The result also pointed out the differences among the smoking rate of the occupation groups. Farmers had higher smoking rate than official staffs and other occupation groups (Table 4). These results could suggest the appropriate and effective interventions and policies for local health managers in the future.
In the present study, the smoking rate of Khmer people in no physical activity group was higher than the group of alcohol independence (OR=0.34; Table 5). Smoking is the leading preventable cause of death among individuals with mental health difficulties (MHD). Cross-sectional analysis of a national representative sample of 8175 community-dwelling adults aged 50 and over from The Irish Longitudinal Study on Ageing (TILDA) was undertaken, smoking and also associated with the presence of smoking-related disease (ORs ranging from 1.24 [1.01-1.51] to 1.62 [1.00-2.62]). These findings underscore the need of attention to the physical health of those with MHD including support for smoking cessation [8].
On the other hand, the smoking rate had been related to other health behaviors such as alcohol abuse and physical activity.
The smoking rate in alcohol abuse group was higher than the group of alcohol independence (OR=5.3;
Table 5). It suggested that the smoking behavior occurred at the same time with other behaviors, especially alcohol abuse. Khmer people have many traditional customs and festivals that why drinking alcohol and smoking were considered as communication in commune.

The risk of lung cancer in Khmer people aged from 25-64 at Tra Vinh
The risk of heart and cancer diseases (especially lung cancer) is higher if having the longer the exposure time with smoke an smoking. According to the American Association for Thoracic Surgery (AATS), people aged ≥55 years old who smoked ≥30 packsyear have a high risk of lung cancer [9]. Despite a reduction in the rate of tobacco smoking, including second-hand smoke, since 1990, smoking exposure remained the fifth leading risk factor for deaths and DALYs in Iran in 2010 [3]. For data in Viet Nam, of the adult respondents, 55.5% believed that smoking may cause lung cancer, stroke, and heart disease [7].

The study of Charafedine et al. [10] provided an estimate of the percentage of cancer in Lebanon by 2018 that has been due to the exposure to risk factors in 2008, lung and laryngeal cancers in both males and females had the largest proportions attributable, with 79% and 72% of lung cancer cases in male and female respectively have been involved to the result of smoking. As for the rest of the cancers associated with smoking, the percentages and relative risks were higher in male than in female. Smoking caused most cancer cases, and it will further add a total of 1800 new cases by 2018. Among many other cancers, lung cancer had the largest proportion attributable of around 75% [10]. This study showed that 7.5% of smokers in Khmer people had the risk of lung cancer in near future (Table 6).

The authors declare that they have no conflit of interest. 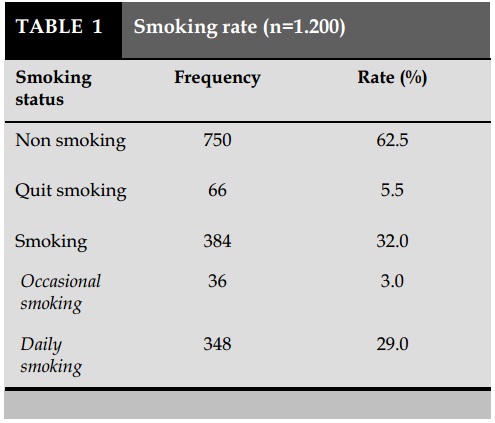 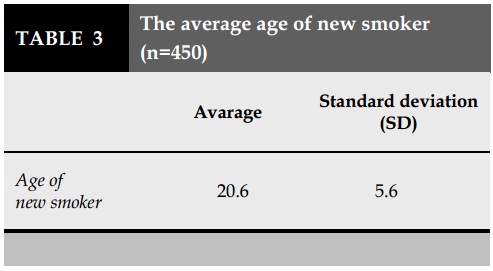 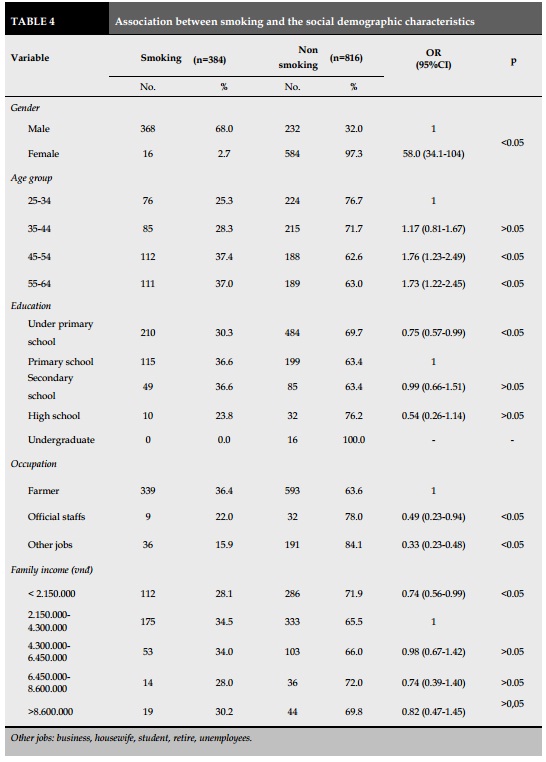 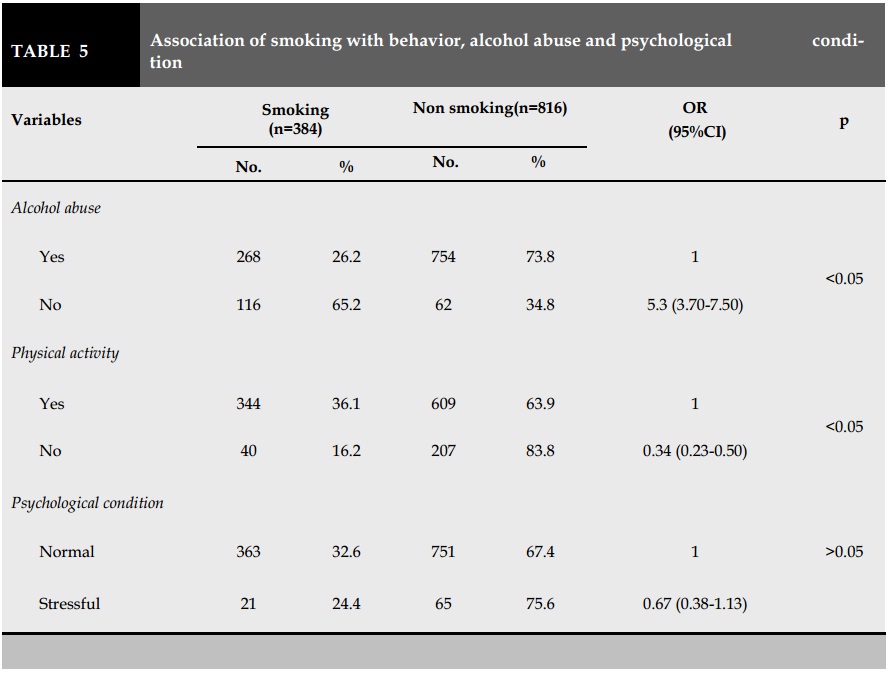 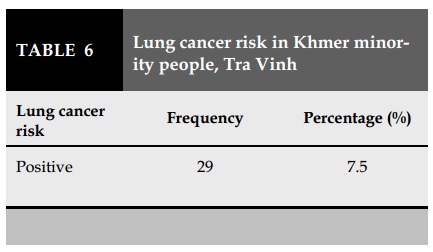