Introduction. Bone marrow is a good source of stem cells with different capabilities of regeneration and differentiation, including haemopoietic stem cells (HSCs), mesenchymal stem cells (MSCs), endothelial stem/progenitor cells (EPCs). MSCs administration has been applied to clinical trials to treat COPD.
Methods. Describing the procedure of stem cell separation from bone marrow (BM) fluid obtained from BM aspiration in 28 COPD patients and the characteristics of bone marrow derived stem cells of COPD patients.
Results. During and after the procedures, no severe adverse events or death occurred. The average bone marrow fluid volume was 323.46 ± 41.13 (ml). The average nucleated cells count was 4.66 ± 2.02 (x109 cells), with MSCs count of 1.02 ± 0.85 (x106 cells). The dose of MSCs for intravenous infusion was 19.15 ± 15.85 (x103/kg). The viable rate of MSCs after separation was 88.92%.
Conclusions. The procedure of stem cell separation from BM fluid obtaining from BM aspiration is simple, safe and tolerable in COPD patients. Viable rate of MSCs was high and MSCs dose was thousands of cells for each kilogram weight.\

Chronic obstructive pulmonary disease (COPD) is a common disease which is the 4th leading cause of death in the world [1]. In 12 nations and territories in the Asia – Pacific region, the rate of moderate to severe cases of COPD accounted for 6.3% of the population over 30 year-old, with the lowest rate of 3.5% in Hong Kong and Singapore and highest rate of 6.7% in Vietnam [2].

The management of COPD includes comprehensive measures including pharmacological and non-pharmacological treatment, to reduce symptoms and risk of exacerbations [1]. However, these treatments do not prevent systemic inflammation and disease progression, as a result, COPD remains a serious burden all over the world.

Bone marrow is a good source of stem cells with different capabilities of regeneration and differentiation, including haemopoietic stem cells (HSCs), mesenchymal stem cells (MSCs), endothelial stem/progenitor cells (EPCs). MSCs are stromal cells which can regenerate and differentiate into a number of cell types. In addition, preclinical trials in vitro or in vivo showed anti-inflammatory and immunomodulatory effects and lung tissue repair of MSCs [3-6].

Base on that finding, MSCs administration has been applied in clinical trials to treat COPD. This treatment for COPD may be helpful to the patients, improving their quality of life [7]. Additionally, several previous studies showed the safety of stem cell therapy in chronic lung diseases [7]. In this paper, we describe the practical procedure of stem cells isolation from BM fluid obtained from BM aspirations for COPD treatment.

Patients
Including 28 COPD patients, aged from 40 to 80 years old at the Respiratory Centre, Bach Mai hospital, with a Forced Expiratory Volume in 1 second (FEV1) ≤ 60%, with at least 2 exacerbations or 1 hospitalised exacerbation in the previous year, and volunteered to participate in the study from August 2018 to August 2020.

The patient was placed in lateral decubitus position with the back parallel with the side of the operating table.

Thighs were flexed up, and neck was flexed forward (fetal position).

After preparing the back with an antiseptic three times, the patient was given spinal anasthesia with bupivacain and fentanyl.

BM aspiration was done by 2 hematologists, all aspirates were pooled in plastic bags containing heparin. 250ml – 300ml of bone marrow fluid was aspirated from bilateral posterior iliac crests of patients.

The whole procedure lasted about 40 minutes.

The bone marrow fluid was then processed by the Sepax 2 system with SmartRedux protocol automatically using CS-490.1 kit to produce 82ml of fluid containing stem cells at the Cellular laboratory of the Hematology and Blood Transfusion Center, Bach Mai Hospital. This automatic system operated in a functionally-closed and sterile environment with a single-use kit. It took approximately 1 hour to complete this automatic process.

The quality of stem cells was assessed by complete cells count test, flow cytometry to assess the surface marker expression of CD34, MSC panel and viable percentage as well as bacterial and fungal cultures. The qualified stem cells were approved with the number of nucleated cells not smaller than 3x108 and viable rate not smaller than 75%.

The stem cells fluid was divided in half, 40ml was infused to the patients intravenously via a peripheral vein after extraction, the other 40ml was freezed down and cryopreserved in liquid Nitrogen at -196 degree Celsius and the rest of 2 ml fluid was used for laboratory tests. The infusion rate was 100ml per hour.

After the stem cells infusion, the patients were monitored in hospital for 7 days, followed by a discharge, and a monthly check-up in 1 year. In this paper, we focus on the procedure of stem cell separation and the 1st infusion.

All patients participating in the study were given appropriate information about aims, methods, benefits and risks of the study, signed the Consent forms to voluntarily participate in the study and have the right to withdraw at any time.

Among 28 patients enrolled in the study, 100% were male, average age was at the sixth decade of life. 100% of patients were categorized at GOLD D class according to GOLD 2016. All patients had  airway obstruction classified of severe and very severe level. No patient had serious risks to general health at the time of research.

The viable rate of MSCs at the time of cell separation was quite high of 88.92% (Table 2). Bacterial culture and fungal culture of stem cell fluid were all negative.

Autologous BM stem cells infusions were well tolerated. No death was observed. During aspiration procedures, adverse events were seen in 9 patients including hypotension, bradycardia or both. After the infusion, there was no serious adverse event (Table 3).

In recent years, several researches on stem cell therapy for chronic lung diseases have been conducted on animal models and human, using stem cells from bone marrow and adipose tissue [7]. Safety is the first concern of this therapeutic intervention. During and in short-term monitoring after the procedures, no serious adverse event or death was noted. However, several mild or transient AEs were found (Table 3), in which hypotension and bradycardia seemed to relate to spinal anesthesia agents, and patients recovered promptly by fluid infusion and/or atropin/epinephrin administration.

Until now, 2 clinical trials using autologous BM stem cells treatment for COPD had been published, they also reported no adverse effects related to the therapy [8, 9].

In general populations, BM aspiration is considered a safe procedure [10], while patients in this study were elderly and had severe/very severe COPD. Therefore, risks of adverse effects of BM aspirations for these patients was such a concern, especially when patients were in prone position and the BM fluid volume was quite high.

Currently, no international guidelines for stem cell therapy have been published. The standardized procedure, the optimal dose of cell in each infusion, the number of infusions, how frequent to infuse, etc. has not been established. In the protocol of cell therapy for the treatment of chronic obstructive pulmonary disease applying in Brazil, patients were given granulocyte colony stimulating factor (G-CSF) subcutaneously for three consecutive days before the bone marrow harvesting procedure [9, 11].

In addition, in other studies using cell therapy for COPD, extensive cell culture procedures were applied to expand the number of stem cells, that may alternate cells’ function beside the concern of mutations and potential carcinogenic risks [12, 13]. Moreover, cell expansion would be expensive. A simple, automatic and short-duration procedure like we described above may be beneficial and cost-effective.

In this study, the average dose of MSCs was 19.15 ± 15.85 (103 cells/kg). As MSCs account for only 0.001% to 0.01% of the BM cells, it required to harvest a large amount of BM fluid and extensive culture to obtain an adequate cells dose for therapeutic treatment [15]. The dose of cells using in this study might not be optimal. However, patients would be followed in a longer time to evaluate the safety as well as the efficacy of stem cells therapy.

The procedure of stem cell separation from BM fluid obtained from BM aspiration is simple, safe and tolerable in COPD patients. The viable rate of MSCs was high and the dose of MSCs was thousands of cells for each kilogram weight. Establishing the safety of this procedure may allow further trials of BM derived stem cells therapy in clinical practice.

This study was funded by the Ministry of Science and Technology, Viet Nam.

No conflict of interest to declare. 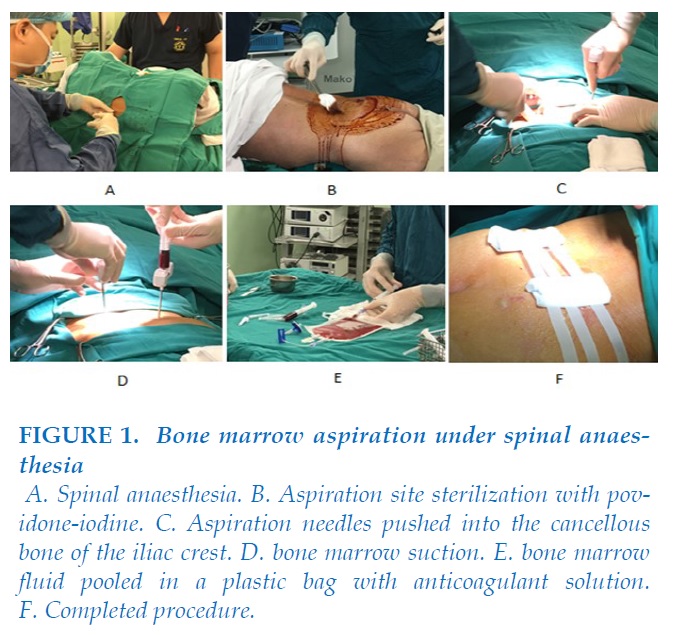 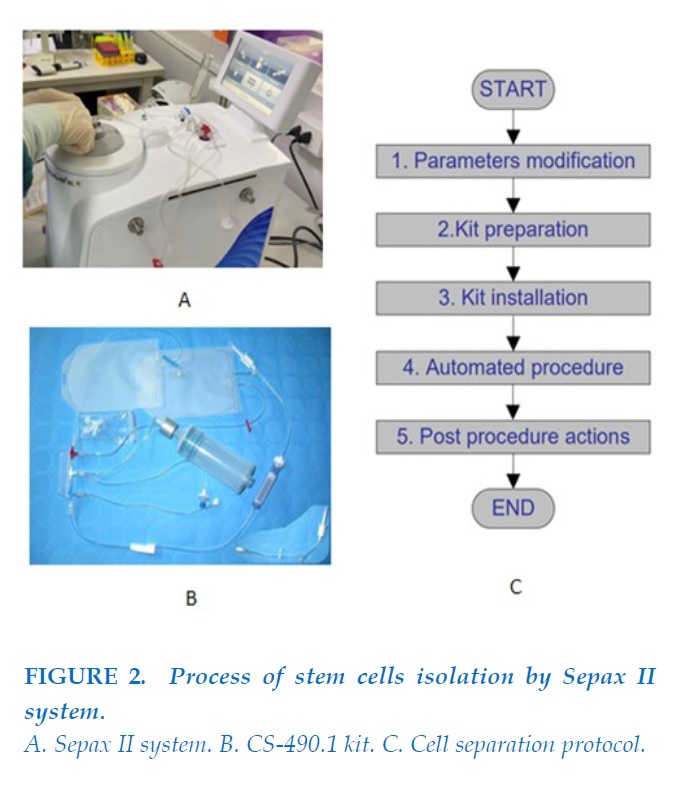 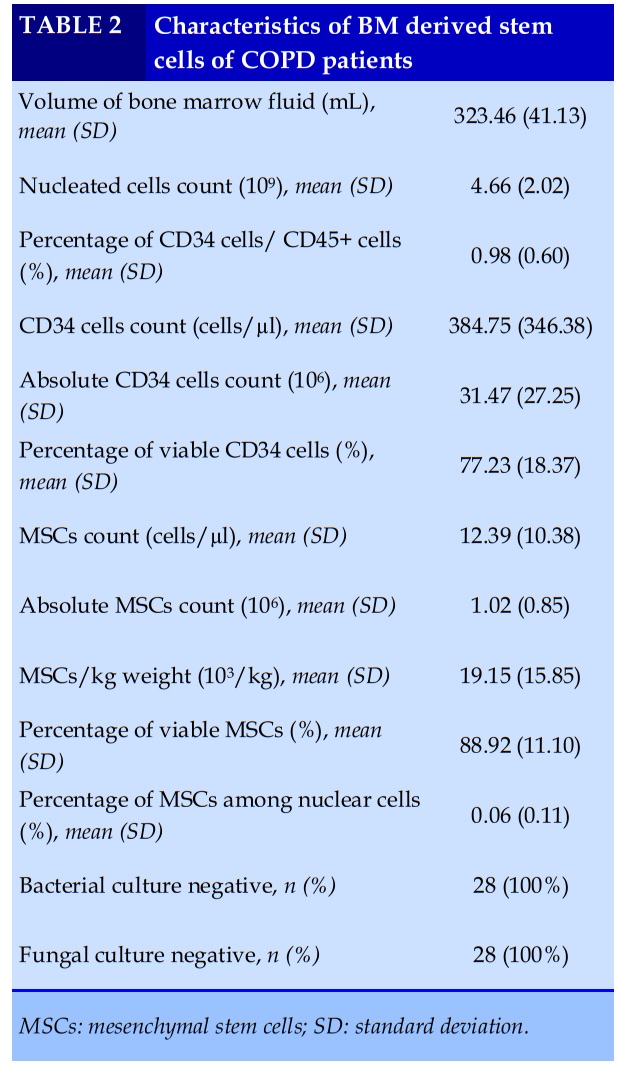 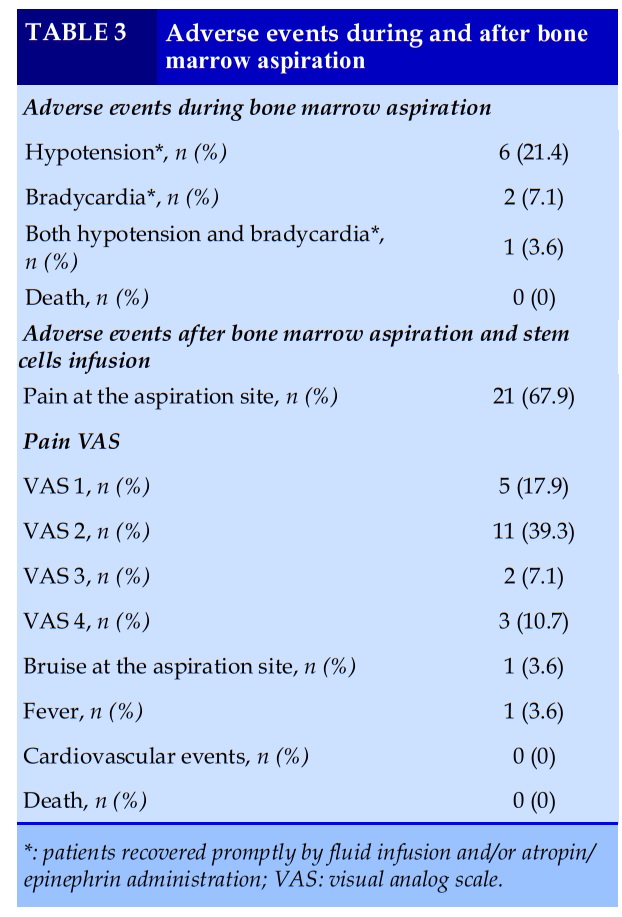