Introduction. Asthma and allergic rhinitis are the most common chronic airway diseases in children. According to the Association of Allergic Rhinitis and its Impact on Asthma - ARIA (Allergic Rhinitis and its Impact on Asthma), the rate of allergic rhinitis (AR) with bronchial asthma accounts for 80%. Studies have confirmed the important role of bronchial asthma control in AR control outcomes in asthmatic patients with AR. Studies have shown that bronchial asthma worsens ARand that AR treatment improves asthma symptoms. We conducted this study with the expectation of evaluating the correlations between NO levels and asthma control status.
Methods. A cross-sectional descriptive study on 154 subjects volunteered to participate in the study and was divided into 2 groups: group 1 consisted of 124 children with asthma and a co-morbid condition called AR; Group 2 consisted of 30 subjects as a control group with children with bronchial asthma but had no associated AR.
Results. The study results showed that the concentration of nNO in children with asthma with allergic rhinitis was higher than that in children with asthma without allergic rhinitis. The concentration of nNO is closely related to FENO and allergic factors such as IgE, eosinophils in peripheral blood. After 6 months of prophylactic treatment, the rate of complete asthma control in children with asthma was lowest according to GINA criteria of 67.5%, and highest according to ACT criteria at 96.1%. Airway FeNO and nNO concentrations decreased after asthma and allergic rhinitis prophylaxis. Parameters of blood eosinophils, blood IgE, FeNO, and nNO are inflammatory markers that help classify asthma phenotype, predict severity of asthma and predict/ expect a response to treatment with corticosteroids.

Asthma is a diverse disease. Every year, the Global Asthma Program (GINA) updates its definitions, investigations in Asthma as well as treatment and prevention protocols.

GINA 2020 [1] defines Asthma as a heterogeneous disease, often characterized by chronic inflammation of the airways. It is defined by a patient history of respiratory symptoms such as wheezing, tachypnea, chest tightness, and cough that vary in duration and intensity, along with fluctuating expiratory airflow limitation.

The presentation of clinical symptoms and the severity of the disease varies from patient to patient, demonstrating the heterogeneity of the disease and making it difficult to diagnose, predict and treat asthma. especially in children.

Asthma control is the primary goal of asthma prophylaxis. There are different methods for assessing asthma control. Until now, we often use the Asthma control test (ACT) to assess asthma control because of its convenience and ease of application on both children and adults. However, this toolkit only assessed asthma symptoms and did not assess the impact of comorbidities on asthma control, especially Allergic Rhinitis [4].

In Vietnam, studies on the value of the CARATkids questionnaire as well as the correlation of this questionnaire with the concentration of NO in the airways on asthma patients are still few, especially in children.

The method for research

Patients who come to the National Children's Hospital clinic are asked about their illness, clinical examination, and tests to confirm the diagnosis of bronchial asthma (with and without associated allergic rhinitis)., After being diagnosed with bronchial asthma, patients with or without allergic rhinitis aged 6-15 years old were invited to participate in the study. Children aged 6-15 years with no nasal symptoms, no personal and family history of allergic diseases who attended hospital physical examination were invited to the healthy reference group.

Step 2: Treat and evaluate control of asthma and allergic rhinitis.

- Asthma stage 2: use low dose ICS in combination with SABA when needed.

- Intermittent VM – moderate/severe: treat with LTRAs, if necessary, oral antihistamines can be added.

- Persistent - mild VM: treat with LTRAs; if necessary, oral H1 antihistamines can be added. Choose low-dose intranasal corticosteroids if the child has previously had a poor response to H1 antihistamines and LTRAs.

- Persistent - moderate/severe VM: Treat with LTRAs in combination with low-dose intranasal corticosteroids or treat with high-dose nasal data. corticosteroids. If symptoms are severe, add an oral H1 antihistamine at the start of treatment.

- If the nose is blocked, you can add a decongestant spray (xylometazoline hydrochloride 0.05%).

- Interview the asthma control panel according to GINA, ACT and CARAT kids (for children with asthma).

The average dose of ICS at the beginning of treatment of the asthmatic group with allergic rhinitis was 322 ± 124 mcg, slightly increased after 1 month of treatment. The ICS dose was then tapered at the 3rd and 6th months. After 6 months of treatment, the mean ICS dose was 248.1 mcg. The difference was statistically significant with p<0.05.

Classification of asthma phenotypes in asthmatic children with allergic rhinitis according to the number of eosinophils in peripheral blood.

There was no difference in asthma prevention outcomes between the two groups after 6 months of treatment.

Grouping of asthma phenotypes in children with bronchial asthma with allergic rhinitis according to FeNO concentration.

Before treatment, the rate of poor asthma control according to ACT and CARATkids was highest in the elevated FeNO group (>35ppb) and lowest in the non-increased FeNO group (<20ppb), but the difference was not statistically significant with p>0.05. There was no difference in ICS dose and asthma control rate according to ACT and CARATkids in 3 groups after 6 months of treatment (Table 3).

One of the pathogenesis of asthma is eosinophilia-associated chronic airway inflammation, which is fundamental for asthma treatment and prevention. FeNO below 20 ppb is the recommended threshold in ATS monitoring of asthma control [7]. In our study, the rate of asthma with  reasonable control in terms of FeNO after 1 month, 3 months and 6 months of treatment was 61.8%, 78.6% and 76.6% respectively, higher than before treatment. 37.9%. Before treatment, FeNO levels of children with ASTHMA higher than 20ppb all decreased below   20 ppb at follow-up time after 1 month, 3 months,  6 months and lower than at the first visit (p<0.05). When treated with ICS, airway inflammation improved, clinical symptoms decreased, and FeNO levels decreased.

Asthma phenotype according to the ratio of eosinophils in peripheral blood

Based on the isolation of airway inflammatory cell types, the pathophysiological phenotype of asthma is divided into 4 types: eosinophilic asthma (EA), neutropenic asthma (NA), and mixed asthma. Increased eosinophils and neutrophils (MGA), asthma did not increase the number of cells in the airways (PGA). Under current conditions, the study has not isolated inflammatory cells in the airways, so blood eosinophils are an inflammatory marker to help classify asthma phenotypes. According to the ratio of BCAT in peripheral blood, classification of asthma phenotype was divided into two groups, group with BCAT < 300 and group with BCAT ≥ 300. FeNO, nNO concentration and percentage of patients with total blood IgE ≥ 200 IU /ml in the group with BCAT ≥ 300 were higher than  those with BCAT < 300. The difference was statistically significant with p<0.05. Before prevention, the rate of poorly controlled asthma according to CARAT kids was higher in the group with BCAT > 300 than in the group with BCAT ≤ 300. The dose of ICS after 6 months of asthma control in the BCAT ≤ 300 group was higher than that in the BCAT > group > 300. However, the difference was not statistically significant. There was no difference in asthma prevention outcomes between the two groups after 6 months of treatment. In this study, the level of BCAT increase only reflected the level of allergy status, the status of asthma control before treatment, did not find a relationship between the level of BCAT increase with the dose of ICS and the results of asthma control after treatment.

The blood eosinophil count is an inflammatory marker that can help clinicians classify asthma phenotypes and predict treatment response in the general asthma population. However, in the allergic asthma group, the change in BCAT only reflected the degree of inflammation.

Asthma phenotype according to FeNO

We chose the recommended thresholds of FeNO ATS as unchanged FeNO (<20ppb), moderately increased FeNO (20-35ppb), and elevated FeNO (>35ppb) to classify asthma phenotypes. The results showed that the low FeNO group had blood IgE concentration, low eosinophil count, and low nNO concentration. Monitoring control of asthma and allergic rhinitis after 6 months showed that the asthma group with FeNO < 20ppb had a higher need for ICS and the rate of complete asthma control according to CARATkids was lower than the other 2 groups, but the difference There was no statistical significance with p>0.05.

In studies / worldwide, the authors used different clinical and laboratory characteristics such as allergic status, blood eosinophils, airways, blood IgE levels, respiratory function. and FeNO concentration to classify asthma phenotypes to choose the appropriate asthma treatment regimen  and treatment prognosis. In children with bronchial asthma, asthmatic children with FeNO concentration <20 ppb are common in overweight and obese children. This is also the group with a high proportion of children with uncontrolled asthma, low respiratory function, and IgE concentration; This is a group of early-onset asthma, with a non-eosinophilic asthma phenotype. The asthmatic children with FeNO ≥35 ppb often had late onset of asthma, a high rate of exposure to tobacco smoke, atopy, good respiratory function, and high  IgE concentration, this is the phenotype of leukocytosis. Eosinophils have not been treated prophylactically. This group responded better to ICS than the non-eosinophilic asthma group.

In 2014, Just conducted a study on 125 asthmatic children with an average age of 8.9 years [8]. The authors based on the results of skin prick tests, respiratory function, blood IgE levels, FeNO to evaluate allergic properties.

Asthma phenotype according to respiratory function

5. (GINA), G.I.f.A., Pocket guide for asthma management and prevention for adults and children older than 5 years. 2016. 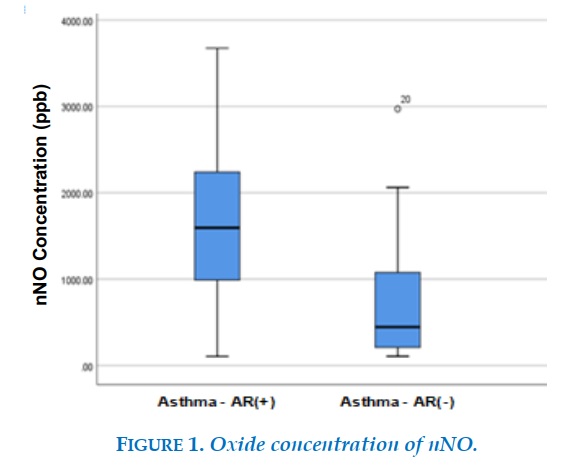 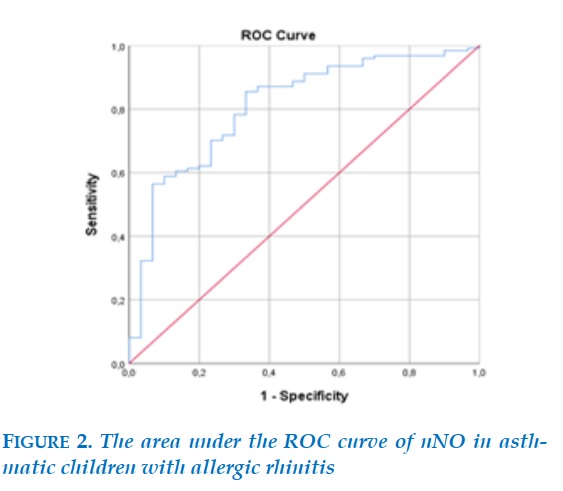 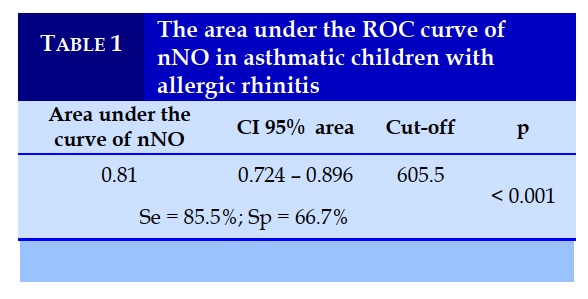 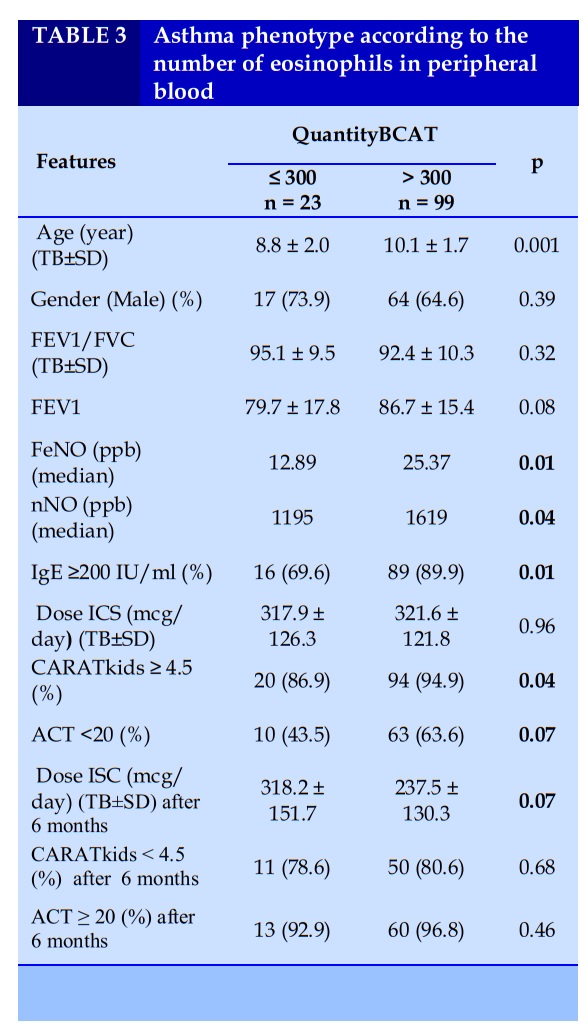 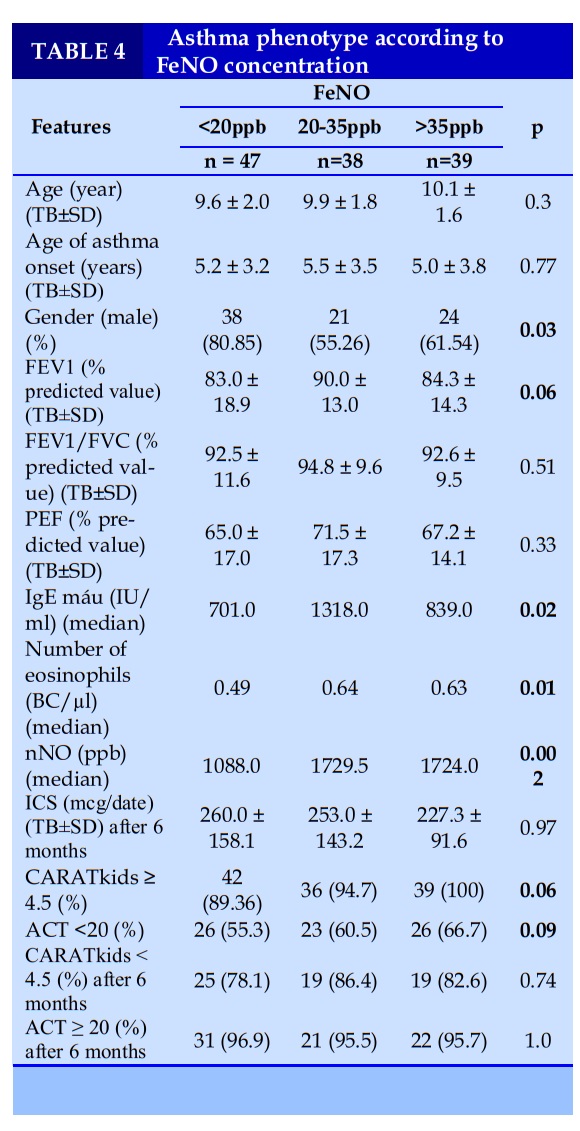 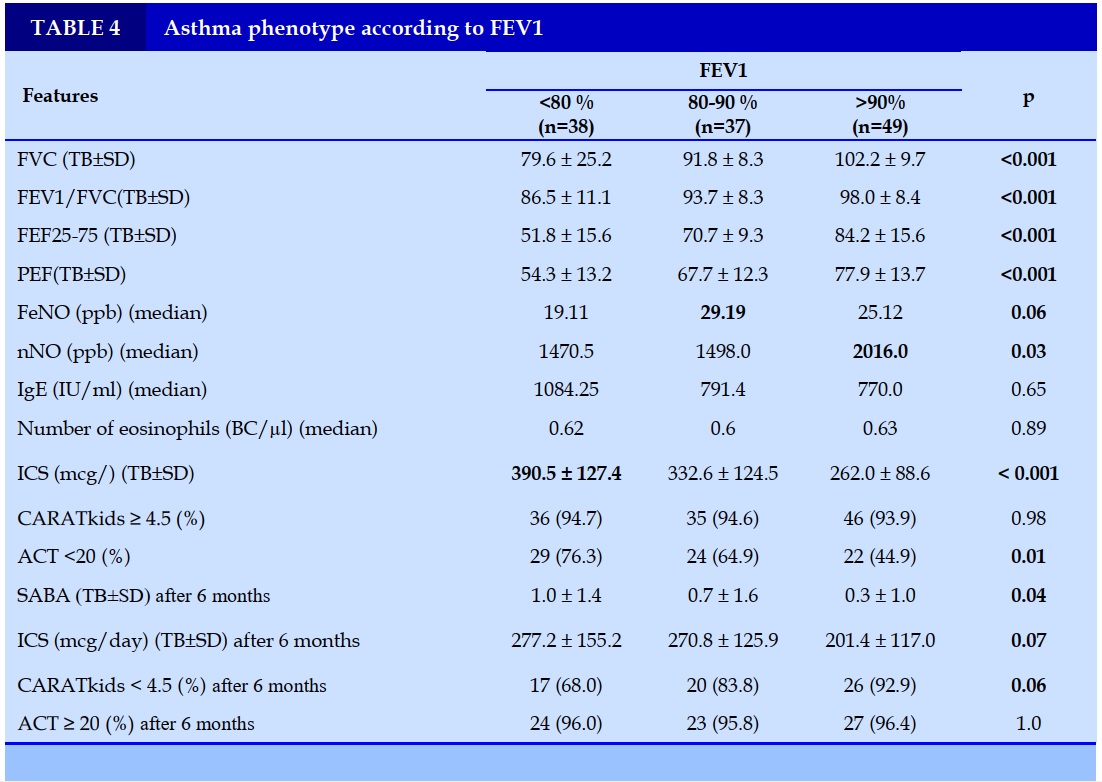 5. (GINA), G.I.f.A., Pocket guide for asthma management and prevention for adults and children older than 5 years. 2016.