Background. Rheumatoid arthritis (RA) is a systemic inflammatory disease of unknown etiology. Its characteristics consist of a destructive joint disease as well as extra-articular manifestations. The lungs are commonly involved and this involvement leads to excess morbidity and mortality. RA can present at any age and is more common in women than men. RA can affect any of anatomic part of the respiratory system from the upper airways to the distal parenchyma. Interstitial lung disease (ILD) is one of the most severe of the extra-articular manifestations.
Observation. A 22 year-old non smoker girl was hospitalized in the Tuberculosis (TB) and Lung Disease Can Tho hospital with a strong suspicion of pulmonary TB. However, the treatment by corticosteroid was administered following by the results of smear negative and her rheumatoid arthritis. She had clear improvement on clinical and chest radiographs.
Conclusion. Although the incidence of TB is high in Can Tho, ILD should be thought of especially in the patients suffering from systematic disease and negative smears of sputums.

Can Tho Province is situated in the Lower Mekong Delta (South of Vietnam) and Tuberculosis is still a significant burden with an incidence of 110/100,000. Besides the cases with a positive AFB smear of the sputum, anti-tuberculosis drugs are also administered to those with clinical manifestations such as fever, cough, hemoptysis and existing or unchanged infiltrates or alveolar opacities on chest x ray after 710 days under surveillance and never treated with anti-tuberculosis before.

Rheumatoid arthritis (RA) is a systemic inflammatory disease of unknown etiology. Its characteristics consist of a destructive joint disease as well as extraarticular manifestations. The lungs are commonly involved and this involvement leads to excess morbidity and mortality. RA can present at any age and is more common in women than men (3:1). RA can affect any of anatomic part of the respiratory system from the upper airways to the distal parenchyma. Interstitial lung disease (ILD) is one of the most severe of the extra-articular manifestations. The risk factors for ILD due to RA are smoking, male gender and advanced age. RA can affect any part of the respiratory system from airways to parenchyma. Parenchymal disorders are ILD, organizing pneumonia, rheumatoid nodules, and airways disease. Patients with RA can also have parenchymal lung disease from the medications used to treat RA such as methotrexate, sulfasalazine and D-penicillinamine [1, 2].

We present a case of an organizing pneumon in a patient with RA hospitalized with an initial diagnosis of pulmonary tuberculosis.

A 22-year-old non-smoker girl presented to the emergency department with breathlessness, productive cough, minor hemoptysis and low-grade fever. This dyspnea began 2 weeks prior with pains in her bilateral joints (knees, ankles and fingers).

In her past history, she only had a diagnosis of RA was made by the specialists from Cho Ray hospital 5 years ago. However, she was only treated for a few months under prescriptions of her rheumatologists then left back home without treatment and surveillance. She has bought some “pain-killers” at the chemist for times of crises. She also denied any treatment of tuberculosis and pneumonia before. She did not mention anything special on her family members consisting of her parents and her two older sisters such as tuberculosis treatment or respiratory infection.

At admission, some vital and clinical signs were noted such as her fatigue, paleness, breathlessness with RR (respiratory rate) 24 times/mn, SpO2 of 90% on room air. Body temperature was 37oC. No signs of adverse effects of glucocorticoids were detected. Her height was 155 cm and weight was 48 kg. She also complained of the pains in bilateral and peripheral joints and joint stiffness in the morning (Figure 1). No rheumatoid nodules were found. Bilateral crackles and bronchial rales were found on auscultation.

The initial diagnosis of pulmonary tuberculosis was established with differential diagnosis of severe bacterial pneumonia. That patient was treated with oxytherapy to maintain SpO2 > 92 %, Ceftazidime 2 g/days and other symptomatic treatments. However she continued to complain about fatigue and breathlessness during the first days of her hospitalization. After 3 days with treatment above, we received the results of 3 consecutive negative AFB (acid fasting baccilus) sputums. The new diagnosis was organizing pneumonia (OP) due to RA that was made in this clinical context and the history of the patient. Methylprednisolone (1,5 mg/kg/day) IV was given to her in addition to IPP, Calcium–vitamin D and Cotrimfort for prevention of Pneumocystic Carinii. The patient had clear improvement on joint pain and breathlessness after 24h administration of the new treatment. Then, corticosteroid was used with the dosage of 1 mg/kg/day then maintained and reduced progressively to the dosage of 20 mg at discharge.

The chest X ray has made for when the patient returned for consultation (Figure 5, Figure 6).

In this situation, we could not confirm the diagnosis of RA by serum specific tests. However, we diagnosed RA based on the former diagnosis from the specialists from Cho Ray hospital as well as her clinical presentations, including pain in bilateral and peripheral joints, joint morning stiffness, atrophy and joint deformity.

In this patient, pulmonary tuberculosis was the first diagnosis due to the clinical context because she had no fever or low-grade fever (at home), fatigue, hemoptysis and no clear signs of bacterial infection. (Blood cell count showed a normal number of leukocytes as well as the percentage of neutrophils). The chest x ray showed bilateral alveolar opacities with air bronchogram (Figure 1). The diagnosis of bacterial pneumonia could not be excluded completely with such chest images. In our hospital we could not perfom procalcitonine in serum and CRP was not always available. No clinical improvements and the result of AFB smear negative did change our first diagnosis. Then the setting of RA with parenchymal infiltrates, without signs or symptoms of infection and negative TB testing, we made a presumptive diagnosis of OP. We decided to treat the patient corticosteroids but not anti-tuberculosis agents. Under the strict surveillance, that patient received corticosteroids as empirical treatment.

As the time when we made diagnosis, we could not perform the PCR (polymerase chain reaction) –TB sputum that could improve the yields of diagnosis of TB [3]. We could not perform chest CT scan, especially HRCT to verify the kind of parenchymal patterns.

However, with clinical improvement and chest x ray done after every consultation, we could conclude that the diagnosis of OP was accurate for this patient. The patients did not be treated with methotrexate, sulfasalazine and D-penicillinamine which could cause ILD, so we could exclude that OP would be done by such medications.

Although the incidence of TB is still high in Vietnam, especially in Can Tho, the treatment of negative TB should be carefully decided after taking meticulous history of the patients (systemic disease, medications in use…) and surveillance of such cases to evaluate the result of the TB treatment. ILD should be considered in case of bilateral alveolar opacities on the chest X ray, especially in the setting of RA.

The authors declare that they have no competing interests.

3. Choi YJ, Hu I, Madhood A. Clinical significance of a polymerase chain reaction assay for the detection of Mycobacterium tuberculosis. Am J Cli Pathol 1996; 105 (2): 200-4. 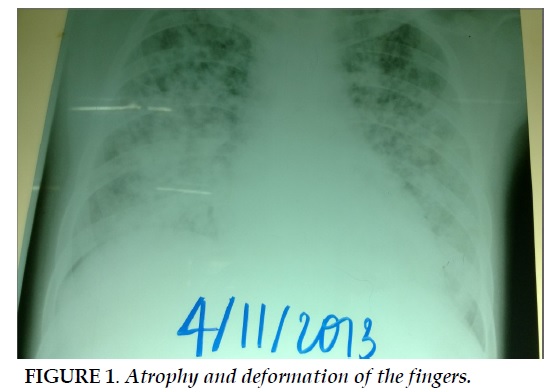 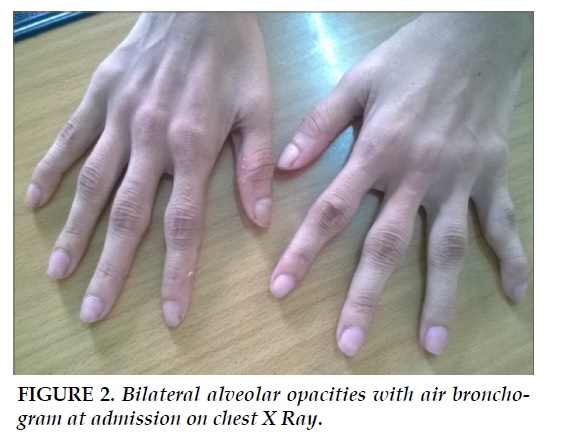 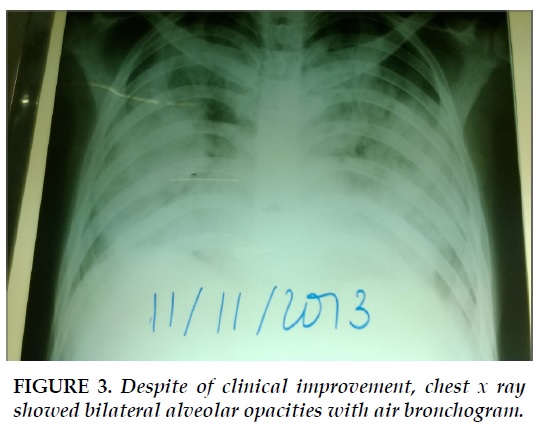 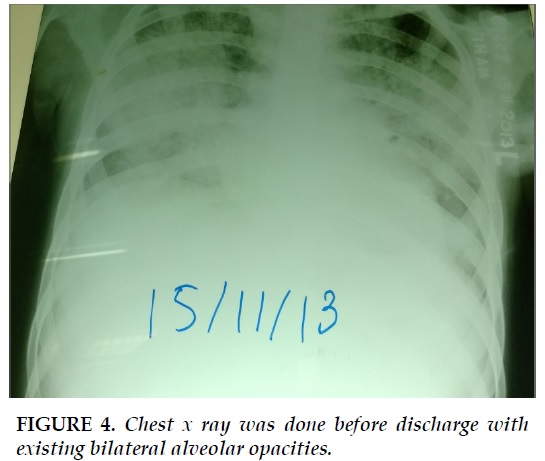 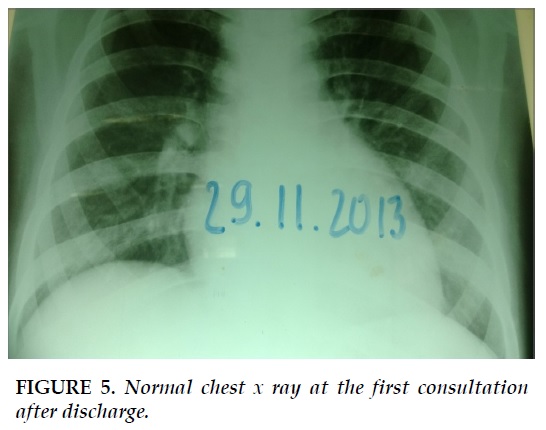 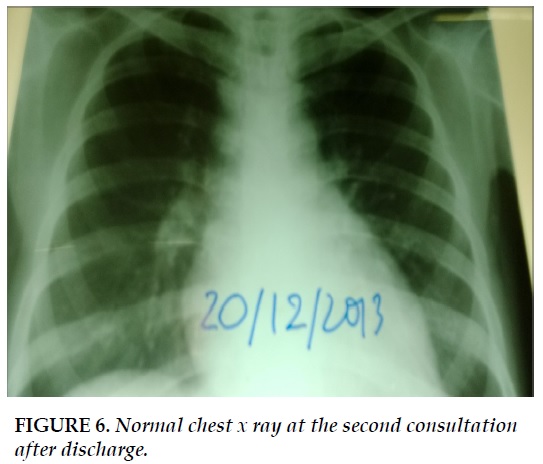 3. Choi YJ, Hu I, Madhood A. Clinical significance of a polymerase chain reaction assay for the detection of Mycobacterium tuberculosis. Am J Cli Pathol 1996; 105 (2): 200-4.