Introduction. Although subcutaneous immunotherapy (SCIT) is traditional method for allergic asthma treatment, it has disadvantages that are the reasons why patients refuse the treatment. However, Sublingual immunotherapy (SLIT) seems to be safe and easy to use.
Objective. to evaluate the changes of clinics and immunologic parameters in allergic asthma patients to Dermatophagoides pteronyssinus (Dp) treated by SLIT and SCIT before and after 6 months of treatment.
Method. All patients diagnosis specific allergic asthma to Dp were divided into 2 groups: group 1 including 30 patients treated with SLIT and group 2: 30 patients treated with SCIT. This is a blind placebo study method at Haiphong Medical University Hospital.
Results. Clinical symptoms decreased significantly (p<0.01) in both groups. Total IgG increased in both groups. Total IgE, destroying mastocyte decreased (p<0.01) in both groups. However, No difference can be found in clinical and immunological changes in allergic asthma patients treated by SLIT compared with SCIT (p>0.05).
Conclusions. SLIT and SCIT were clinically effective and safe in allergic asthma to Dp treatment. But SLIT seems to be safe and easy to use more than SCIT.

Asthma is a common respiratory disease with clinical manifestations ranging from mild to severe. The treatment of pathogenesis of asthma, also known as immunotherapy (IT), is the only treatment that changes the natural progression of allergic disease, with long-term efficacy for allergic asthma. The allergens are introduced into allergic subjects in a small quantity  until it reaches the dose that reduces or loses the allergic symptoms at subsequent contact with the allergen.

Currently, the IT uses two common routes for the introduction of allergens into the body: injection in the skin (subcutaneous) and under the tongue (sublingual). The tests for the diagnosis and evaluation of the effectiveness of IT treatments are increasingly with systematic method. Which, first of all, is the important role of immunoassays. Based on the change in immunological and clinical tests, it is possible to accurately assess the effect of IT on allergic asthma. On the other hand, Dermatophagoides pteronyssinus (Dp) has been prepared and standardized in Vietnam.

Therefore, studying the change of immunological indices in patients with asthma allergic to Dp  treated with IT is very necessary and useful. Therefore, we studied this subject with the following objectives:

Method
Treatment of IT treatment.
Conducted at the Department of Immunology and Clinical Allergology of Hai Phong University Hospital.
Allergens: produced by Central Institute of ENT with different concentrations: 10 IR/mL, 100 IR/mL and 300 IR/mL, or 1,000 PNU and 10,000 PNU.

Technical conduct of treatment
With two lines to put drugs into the body:
Subcutaneous injection (1979).
Sublingual use according to Bousquet (1999).
The above treatment procedure was applied at Department of Immunology and Clinical Allergology of Hai Phong University Hospital.
During the course of treatment, we monitored the patients and documented the progress of each patient's records every 3 months and 6 months.

Statistical analysis
Data collected during the study were processed and analyzed by using SPSS 14.0 (Chicago; USA) and other biostatistical methods.

Changes in clinical symptoms
The symptoms of prodrome were significantly reduced in both groups with injection and sublingual treatment with P<0.01 (Table 1).
The physical examination of patients with asthma showed that before treatment, the majority of patients had dyspnea (76-81%; Table 1). After the treatment period, 66.66% of the patients in the injection group and 83.34% in the sublingual group had normal respiratory rate (16-20 times/min; Table 1).

When auscultation of the lungs, the number of patients who had wheezing or snoring rales was significantly reduced from 70-80% to 23.33% for the subcutaneous injection and 23.33% for the sublingual therapy. In particular, 16.66% of the patients with injected treatment and 40% with sublingual treatment had undergone no respiratory rales after 6 months of immunotherapy (Table 1).
In comparison with the clinical therapeutic efficacy between two groups of patients treated with sublingual immunotherapy and subcutaneous injection, there was similar effect. This difference was not statistically significant with P> 0.05.

Thus, the ability of the immune response to external stimuli to the respiratory tract increases.

Monitoring the number of monthly exacerbation in the study subjects showed that the majority of cases were ≥3 times/month, accounting for 60-66.66%, reduced to 23.33% in the patient with subcutaneous injection group and 6.66% in the sublingual group. In particular, some patients who had no pulmonary sounds at auscultation accounted for 16.66% of the injection group and 40% of the sublingual group. This proves that the local hypersensitivity of these patients is moving towards the normal human.

Ameae [5] also found a marked reduction in clinical symptoms, especially dyspnea in the immunotherapy group treated with Dp allergens compared to the control group. On the basis of remission of dyspnea, other functional symptoms were also evident after 6 months of treatment. The subjective symptoms are markedly reduced by the patient, which improves patient morale and improves trustworthiness with this treatment. The remission of clinical symptoms before and after immunotherapy treatment with Dp has been confirmed by previous authors [6] and is also a sign that physicians and patients are well aware of during follow-up the treatment. The comparison of treatment efficacy in two groups of patients using two different antigenic distributions, subcutaneous injection and sublingual treatment showed that the overall effect of the two treatments was similar. This result is because both groups of patients are selected according to standards, adhere to the treatment protocol, and be monitored accurately assess the status and course of the disease.

IgE is an antibody associated with type I allergy, which plays the most important role in allergic mechanisms. In normal subjects, its concentration ranges from 0-135 UI/mL.  With allergic subjects, its concentration can increase  to dozens,  even hundreds. In the present study, we conducted the measurement of total IgE before and after treatment. If the total IgE level is reduced by the course of treatment, thus the treatment is effective. Delaunois also commented on the fact that IT was performed in 73 patients with asthma due to Dp found that 91% of patients had decreased serum IgE levels and had a good clinical outcome [7]. Pichler et al., when examining IT-treated in asthmatic patients, found that in addition to decreasing IgE levels, the clinical symptoms, bronchitis, and nonspecific hyperactivity were also reduced [9].

Concerning the serum total IgE level in patients prior to IT treatment, we obtained for a sublingual treatment of 611.67±225.59 UI/mL and for subcutaneous injection of 520.43±157.12 UI/mL. This result was significantly higher than that of the normal group (212.70±95.05 UI/mL). Study done by Trinh in 39 asthmatic patients showed that the total IgE was 484.79±64.30 UI/mL, significantly higher than that of normal subjects. Study realized by Doan on 80 allergic rhinitis patients showed this level was 370.26 UI/mL. Previous studies done by Vu et al. in 73 patients with allergic rhinitis showed the IgE levels were 473.33 UI/mL; by Vu et al. on 33 patients with allergic rhinitis due to Dp was 510.43±385.44 UI/mL. As a result, the total IgE levels were not significantly different among the study groups in allergic patients but were higher than those in the control group (P <0.01) [2-4 ].

After 6 months of IT treatment with Dp allergen, the total IgE concentration was decreased markedly to 310.17±131.34 UI/mL in sublingual group and 310.25 ±187.04 U​I​/mL in injection group, compared to normal subjects (P<0.01). This indirectly determines the descriptors of IgE specific for Dp allergens in asthmatic patients undergoing IT. This result is similar with that of Trinh et al. when realized the treatment of IT with French Dp for asthmatic patients in Vietnam, but the total IgE content after IT was not significantly reduced (484.79-347.17 UI/mL). The results of our study concerning IgE concentration was consistent with Vu's results in the treatment of IT with allergens production in patients with allergic rhinitis (510.43 - 293.78 UI/mL) [3] [4]. This difference might be due to the sensitivity and the antigenicity of Dp allergens that are slightly different from Dp made by foreigner countries.

Besides the reduction of total IgE, when measuring the total IgG levels in patients treated with IT before and after treatment, the results showed that pre-treatment of IgG levels were 976.67±22.29 mg% for sublingual treatment and 1122.10±137.70 mg% for injection route. This rate was lower than that of the normal group (P<0.01) and there was no change in the total IgE level. After 6 months of IT treatment, IgG  concentration  was  increased to 1825.60±247.07mg% of sublingual group vs 1692.57±238.91 mg% in injection group in compared with pretreatment (P <0.01). This result showed that after IT treatment with Dp in asthmatic patients that increased the amount of protective antibody. All of these changes were consistent with the improvement of post-treatment clinical symptoms such as the number of patients without any shortness of breath was increased, and the rest had decreased for a month. Combined assessment of IgG and IgE levels of patients treated with IT was able to assess the efficacy of IT. Lin et al. conducted an IT study with 18 children with asthma for 2 years also found an increase in IgG levels and a decrease in IgE levels, evaluating significant improvements in clinical parameters [8].

The immunology therapy has some limitations, such as pain, swelling of the injection site, which should be carried out at medical facilities and carried out by experienced medical staff. This has made it difficult for some children, who often travel far and distant from medical facilities. The IT has been shown to overcome the limitations of IT treatment, the patients do not have pain, swelling at the injection site and can self-management at home after being guided by the medical staff.

After 6 months of treatment, the clinical symptoms decreased markedly in both groups. The comparison of clinical symptoms before and after treatment between two groups of patients treated with sublingual and subcutaneous injection as adjuvant treatment in patients with asthma was not significantly different.

Mastocyst degradation after treatment with immunotherapy was statistically significantly decreased in both groups of patients treated with either oral or  injection method. The comparison of changes in mastocyst degradation between the two groups did not different.

The total level of IgE after treatment was statistically significantly decreased in both groups of patients treated with either sublingual or subcutaneous injection. The comparison of the change in total IgE levels between the two groups did not differ.

The total level of IgG post-treatment were also significantly lower in both groups of patients treated with either sublingual or subcutaneous injection. However, the comparison of changes between the two groups did not differ.

The authors declare no conflict of interest. 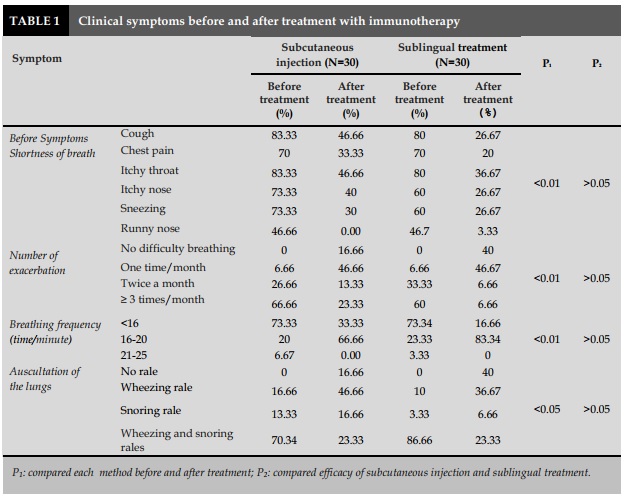 
Date of publication after correction